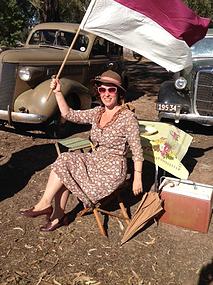 Keeping cool on the set of ‘The Dressmaker’

When we first saw Tom rushing towards us he was wearing a pack on his chest and talking into his collar. His pockets were swinging with filmic accoutrements. Someone asks, ‘Who’s he?’

Later, on the fringe of the Jung oval, Tom sits Katharine in front of a row of lovely old cars with a Dungatar flag and an empty pram; ‘Just act like a normal mum.’

He places Hannah and Emily at the picnic table with a 1950s thermos and cups and some sandwiches. Angela also gets a flag to wave and an ancient fold up stool. Tom gives Meredith and I Dungatar scarves to wear and sits us on the bleachers behind the actors. The camera crew construct their camera and measure things and change lenses and discuss angles and the actors arrive and sit in front of Meredith and I. Alvin and Muriel Pratt, Gertrude, Evan Pettyman, Beula Harridene …

The man with the clapper board takes his place, closes it gently and the Dungatar Demons play footy. We barrack, Jocelyn calls ‘cut.’ Meredith and I watch the crew surround the actors, open umbrellas against the sun and offer drinks and insect repellent. The hairdressers primp and the makeup artists dab and the costume people tug at hems and collars.

Kate Winslet, dressed in startling red couture, walks defiantly across the Jung footy oval in stilettos, composed though her heels are sinking. Her complexion is very English in the Dungatar glare and the Australian bush-green. Behind her, Judy Davis, small and magnetic, watches. Before her, Sergeant Farrat waits.

The actors go, Emily dozes under the bleachers, we visit the refreshment shed. The sun rises, the fly population increases and the sandwiches go hard.

Tom hurries back, listening to a voice in his earpiece. ‘First positions please!’

The actors and their attentive entourage return. We watch the tall, lovely, leading man (Liam Hemsworth) play skilled, choreographed footy, the stunties hovering. We wave and barrack and Katharine rocks her baby. Tom comes rushing back to us. The screen that is the cover of his chest pack plays the last scene back to him and he says to us, ‘That was fantastic, guys, good expressions. Now, you’re really excited, Teddy’s just won the footy match, the first time in 40 years, very exciting, so you run onto the oval after him.’

‘It’s a small town,’ Meredith says, ‘someone will watch her.’

A conspiracy of pale ravens