Things will be different when she starts sewing 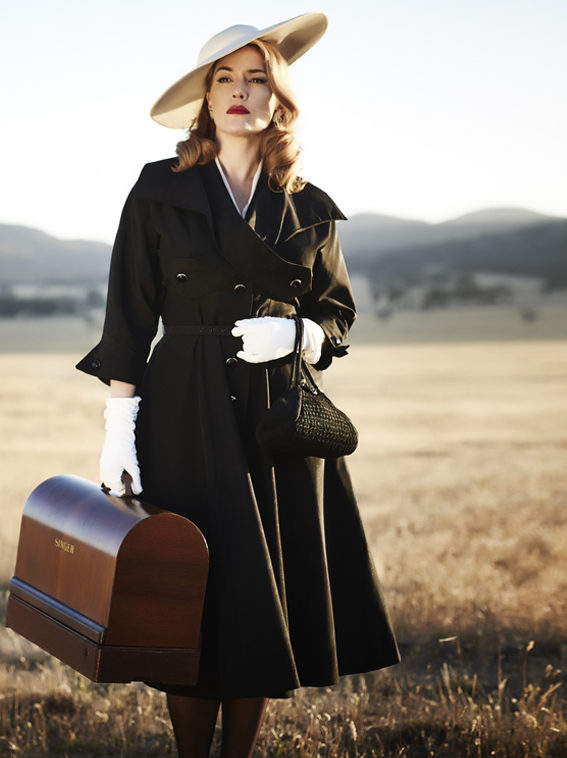 Kate Winslet as Tilly Dunnage on the set of ‘The Dressmaker’

Sometime in 1950, Tilly Dunnage stepped apprehensively into the Dungatar fog from an idling Greyhound Bus – the one that travelled through Jerilderie when I was a kid. It was a breast-backed bus with the slim dog tattooed, mid-leap, under the high narrow side windows.

As a kid, anyone who stepped off that bus seemed different.

Behind those windows, assorted sinister and innocent characters were either going somewhere or leaving something. As a kid, anyone who stepped off that bus seemed different. But thinking back, some of the ‘normal’ people in my childhood were actually pretty different.

The flat Earther lived on the plains to the north, and the woman who drove her sons around in the back of her station wagon left them there when she went into the shops. We were never game to get close but we could see their heads, a misshapen shoulder, a kneecap poking up. Legend said the boys were monstrously crippled, dying. (Multiple sclerosis?) An old lady walked to the shops every day dragging one leaden rigid leg, a cane basket over her stiff arm, her mouth frozen in an Edvard Munch scream.

Apparently, a needle broke when she was sewing, got into a vein and ‘travelled.’ (Stroke?) I once watched a local man trying to convince a street lamp to pick up the loaf of bread he’d dropped (War veteran). And there was the recluse madwoman and town witch. (Alzheimer’s?)

Sergeant Farrat was charming. As we ate, we talked about knitting, dancing in heels and Rita Hayworth’s hat.

It’ll be nice to see an old Greyhound bus pull up in a small town again – the Dungatarians are just characters I made up but recently, full of apprehension, I stepped into the special lunch to celebrate the commencement of filming, and there they all were.

Sergeant Farrat was charming. As we ate, we talked about knitting, dancing in heels and Rita Hayworth’s hat. I recognized Molly (recluse) on a table behind me. I shook her hand (twice) though I wanted to hug her and tell her she was my favourite.

Unlovely Una was chatting … and Alma (sprightly for an arthritis sufferer) was talking to Esbeth (taller in real life). Unfortunate Lois Pickett declared she was delighted to be Lois. Ruth and Nancy sat and ate together, of course. Some Dungatar folk were a little different than I’d imagined, but they all seemed weirdly familiar. I felt Tilly’s incandescent presence in the room, and she seemed benevolent, even friendly. But things will be different when she starts sewing.

A conspiracy of pale ravens